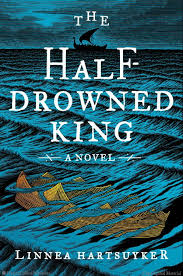 Linnea Hartsuyker’s epic debut perfectly captures Viking Norway in a way that is exciting, uncompromising and elegantly written.  This is a book of heroes and whilst it draws on the Icelandic Sagas retelling of the making of kings, it’s refreshing to find a historical narrative that focuses as much on the female experience as the male without reducing the woman to the role of voiceless lover or pawn. In Svanhild Eysteinsson, Hartsuyker has created a complex and intelligent heroine that seeks to make her own way in a world dominated by men. This novel doesn’t shy away from the gory violent culture of the Vikings but also paints a picture of a society that values cunning and honour in addition to bravery and strength.

The Blurb: Centuries ago, in a blood-soaked land ruled by legendary gods and warring men, a prophecy foretold of a high king who would come to reign over all of the north. . . .

Ragnvald Eysteinsson, the son and grandson of kings, grew up believing that he would one day take his dead father’s place as chief of his family’s lands. But, sailing home from a raiding trip to Ireland, the young warrior is betrayed and left for dead by men in the pay of his greedy stepfather, Olaf. Rescued by a fisherman, Ragnvald is determined to have revenge for his stepfather’s betrayal, claim his birthright and the woman he loves, and rescue his beloved sister Svanhild. Opportunity may lie with Harald of Vestfold, the strong young Norse warrior rumored to be the prophesied king. Ragnvald pledges his sword to King Harald, a choice that will hold enormous consequence in the years to come.

While Ragnvald’s duty is to fight—and even die—for his honor, Svanhild must make an advantageous marriage, though her adventurous spirit yearns to see the world. Her stepfather, Olaf, has arranged a husband for her—a hard old man she neither loves nor desires. When the chance to escape Olaf’s cruelty comes at the hands of her brother’s arch rival, the shrewd young woman is forced to make a heartbreaking choice: family or freedom.

Set in a mystical and violent world defined by honor, loyalty, deceit, passion, and courage, The Half-Drowned King is an electrifying adventure that breathtakingly illuminates the Viking world and the birth of Scandinavia.

I was really excited to read this novel after seeing its gorgeous golden cover winking at me from the new release shelves at my local Barnes and Noble. I’d just come off the back of binging the last of Bernard Cornwell’s Saxon Chronicles and fancied giving this a go whilst my head was still in a marauding and pillaging kind of space. But would it live up to King Cornwell? Well yes. Yes it would.

What I particularly loved about this book are the wonderfully complex characters. Hartsuyker takes the time to develop them and casts a critical eye over each and every one. All have their flaws, are weak at times and selfish but she takes care to ensure that your loyalties as a reader are always torn. There are no stereotypical warrior thugs here, you understand what drives these characters and how they strive to achieve their ambitions in often difficult circumstances.

Hartsuyker is in total control of her research and the setting throughout the novel. You feel like you are getting a guided tour of Viking life, but without the annoying educational voiceover explaining what everything means. She is a master of ‘show don’t tell’ and the descriptions throughout are often surprising and very evocative which ensures that whilst this is not the first Viking historical novel, you never feel like you’ve read it somewhere else before.

Many comparisons have been made between The Half-Drowned King and Game of Thrones and Outlander, but I feel that this does it a disservice. Yes it has the feel of an epic saga, but this one is rooted in a tangible setting and quite frankly kicks Outlander out of the park in terms of quality of writing (and I love Outlander…). That said, if you enjoy those series you will love this – and the best part is it’s but the first in a planned trilogy… The Sea Queen is released 14th August 2018 and I for one can’t wait.