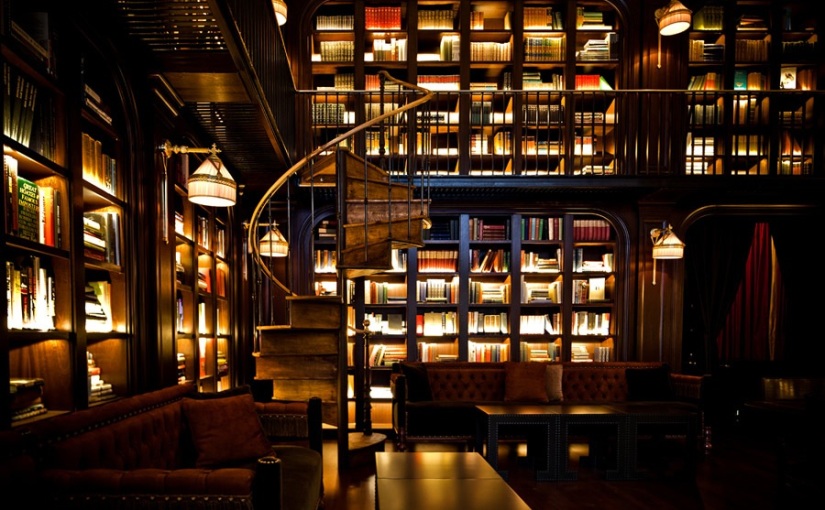 New York has a great literary heritage and there are so many places you can go to soak up some of the liquid inspiration of great writers. In this list you can find places where poets drank, famous bar settings and places where you can just curl up with a manhattan cocktail in front of a crackling fire surrounded by library shelves. Perfect for warming up on a cold and soggy February weekend.

This is best described as an ‘old man pub’ – or as close to one as you’re going to get in NYC. It’s been around since the 1880s, is a certified Poetry Landmark and is famed as the bar where Dylan Thomas sank 18 shots of whisky before collapsing outside then dying of alcohol poisoning several days later. But it’s not just Thomas who has been a regular here – Bob Dylan, Anaïs Nin, Norman Mailer, Hunter S. Thompson, and Jack Kerouac all spent plenty of time propping up the bar. Kerouac was such firm fixture that legend has it ‘Go home Kerouac’ was written over the urinals.

The Shakespeare (inside the William Hotel)

What was formerly The Peacock and is now The Shakespeare is a British restaurant / gastropub that sits inside the William Hotel and has a great library bar modelled on a Stratford pub called The White Swan. The hotel also houses speakeasy style joint The Raines Law Room where you can quaff beautifully made cocktails surrounded by opulent, cosy bookshelves.

This NYC book institution has a lovely cafe inside it where you can sip a wine or one of their monthly themed cocktails whilst also browsing the shelves. The whole place is staffed by volunteers and the stock is donated so 100% of the profits go to Housing Works’ projects. And if you’re looking for a quirky venue, you can even get married here…

Bookmarks Bar at the Library Hotel

This upmarket cocktail lounge will float your boat if you decide you don’t want to slum it with the Beat Poets anymore. The romantic rooftop setting plays the perfect host to  the literary themed cocktails on the menu. Why not try The Pulitzer (Nolet’s Gin, Elderflower, Fernet Branca and agave nectar) or F.Scotch Fitzgerald (Brown buttered Glenmorangie, Campari and Carpano Antica).

Cafe Wah is still a thriving music venue nearly 70 years after it first opened. Allen Ginsberg could often be found here and the likes of Bob Dylan, Jimi Hendricks and Bruce Springsteen all played here whilst launching their careers. This is definitely the place to go if you want to liven things up at the end of your night and with a really eclectic mix of performers there is something for everyone on offer here.

This couldn’t be a literary list of NYC drinking holes without mentioning Pete’s Tavern. In continuous operation since 1864, Pete’s is synonymous with NYC’s writer crowd. The most famous of Pete’s customers was William Sydney Porter – aka O. Henry, the short story writer and in his honour, Pete’s have even kept his booth, where he supposedly wrote The Gift Of The Magi. Legend also has it that Ludwig Bemelmans wrote the first of his wildly popular children’s books – Madeline, on the back of one of the menus…

If you need some food to line your stomach after all those delicious cocktails, then hop over to the newly revived Minetta Tavern. A mainstay of the 1930s Greenwich Village writer crowd including Ernest Hemingway, this wonderful restaurant has been taken over by Keith McNally and is now serving perfectly cooked côte de boeuf and french inspired food in sumptuous surroundings. People rave about this steakhouse – why not pop in before heading next door to Cafe Wah?

The Plaza Hotel should be on a literary tour of NYC for any bibliophile – just make sure you don’t dance in the fountain like F.Scott and Zelda Fitzgerald! The Rose Club Bar is the hotel’s in-house jazz club and the perfect place to escape from the hustle and bustle of the city for a spot of luxury. Craft cocktails with their own mixologist mean that drinking here is a totally unique (and wallet punching) experience. On a side note – if you’re a fan of Home Alone 2  and want to live like Kevin, The Plaza are offering experiences based on the movie and they look AWESOME.

Where would you recommend people go to get a literary drink in NYC? The next edition will be London so get your suggestions in for places for bibliophiles to get a swift one…