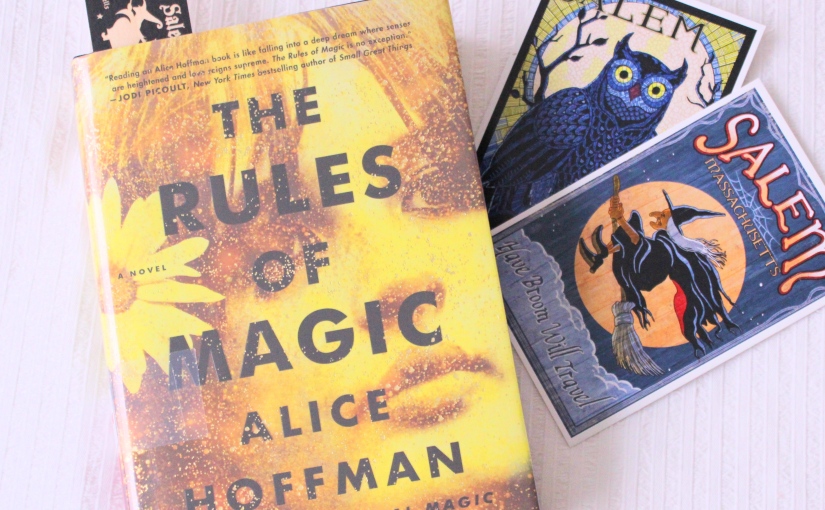 I’m struggling to remember the last time I read a book that didn’t have magic in it…. This hasn’t been an intentional decision – maybe it’s just the autumnal weather kicking in, but it has had the beneficial side effect of immersing me in literary depictions of otherworldliness and getting me to think about what I do, and definitely do not, like about how the extraordinary is dealt with by authors.

The Blurb: For the Owens family, love is a curse that began in 1620, when Maria Owens was charged with witchery for loving the wrong man.

Hundreds of years later, in New York City at the cusp of the sixties, when the whole world is about to change, Susanna Owens knows that her three children are dangerously unique. Difficult Franny, with skin as pale as milk and blood red hair, shy and beautiful Jet, who can read other people’s thoughts, and charismatic Vincent, who began looking for trouble on the day he could walk.

From the start Susanna sets down rules for her children: No walking in the moonlight, no red shoes, no wearing black, no cats, no crows, no candles, no books about magic. And most importantly, never, ever, fall in love. But when her children visit their Aunt Isabelle, in the small Massachusetts town where the Owens family has been blamed for everything that has ever gone wrong, they uncover family secrets and begin to understand the truth of who they are. Back in New York City each begins a risky journey as they try to escape the family curse.

The Owens children cannot escape love even if they try, just as they cannot escape the pains of the human heart. The two beautiful sisters will grow up to be the revered, and sometimes feared, aunts in Practical Magic, while Vincent, their beloved brother, will leave an unexpected legacy.

Alice Hoffman’s writing is really lovely and I mean that in every sense of the word. There is a softness and lyricism to the way she describes scenes, a focus on the senses and how they mix with emotions for the characters. She’s able to deal with difficult situations for the characters in a way that touches you but doesn’t have the brutal edge that lots of authors seek in an attempt to make their writing ‘hard-hitting’ or ‘gritty’. Hoffman weaves her words around you like a spell and draws you in gently.

I wasn’t massively enamoured of the characters in the beginning and it took me a little while to settle into this novel. It is a prequel to Hoffman’s wildly successful “Practical Magic” and I must confess that whilst I’ve seen the 90s movie adaptation with Sandra Bullock and Nicole Kidman (and that took me until last month…) I have never read the original. Perhaps this was why I found the connections a little tricky – I wasn’t already invested in these characters. In the end didn’t even really notice being sucked in. I suddenly realised that I was half way through. And it was dark outside.

Hoffman deals with the supernatural elements superbly. There are plenty of magical shenanigans but it never seems to tip over into the absurd. The fact that the three siblings each go on a journey with their discoveries and that their relationships with magic are heavily influenced by their different approaches to life keeps it grounded and stops it becoming boring. There is no ‘magical fix’ for the obstacles they need to overcome and Hoffman grows the characters throughout the story really effectively as they realise this themselves.

Overall this is a really gorgeously descriptive novel that transports you to 1960s New York. There’s no need to have read “Practical Magic” to enjoy it and if you’re new to Hoffman’s writing this is a great place to start.

3 thoughts on “Review: “The Rules Of Magic” by Alice Hoffman”